Jamie Anderson is EMEA President Digital Experience at Marketo, an Adobe company, overseeing business operations across the region. On March 19th 2019 Jamie spoke at the B2B Marketing Forum in The Netherlands. In this blog, written by Jamie, you will read more about the love story between brand and attraction and about the success of a long-term relationship. 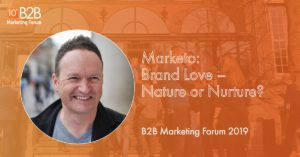 About ten minutes before my wife arrived in the church to marry me, the minister told me the secret of his long-lived, happy marriage: “I think of my wife as my very special girlfriend.” Touching in its simplicity and honesty, it’s a statement that’s stayed with me for years. Because just like it does in a long-term relationship between two people, for a long-term relationship between customers and brands to thrive, it needs to be cultivated and kept alive.

If you want an example of just how powerful the force of attraction is, look at a peacock’s tail.

A peacock’s tail is beautiful, yes. Practical, no. So impractical, in fact, that it makes it tricky for the bird to fly properly, slows it down on the ground and acts as a large, brightly-coloured advert announcing the animal’s presence to predators. It’s a wonder the tail ever survived natural selection . It puzzled Charles Darwin so much that it took him 12 years after publishing On the Origin of Species to figure out why and eventually he came to the conclusion that the need to attract a mate can outrank the need for an individual to stay alive.

Attraction as basis of all relationships

Attraction is the magic that drives our existence. And that of every living creature that chooses a mate. Its success (or failure) governs the success (or failure) of our genes. It infiltrates decisions right down to the smallest of minute-by-minute choices, made on the attractiveness of the options before us. And it’s the basis of all human relationships. I’m going to talk a lot about attraction over the next few months.

That includes our experiences with brands, companies and organisations. For example, in a street full of cafes, why choose one over any other? Because it’s more attractive. It might be because of the coffee, or the prices, or the staff, or even just because it’s a bit closer but whatever it is, you’re attracted to it.

But this creates problems. Like the peahen, we are attracted by shiny and bright enticements. We see plenty of companies exploit this to tempt new customers while ignoring existing ones. They’re sacrificing long-term relationships for instant satisfaction and, as to compare this with a partner with commitment issues, this is not attractive to most people.

Utility companies, insurers and mobile providers, some of the worst offenders, are rarely described as attractive brands by anyone, let alone their customers.

Mobile providers even have the benefit of desirable hardware. And yet their inability to cultivate and maintain a two-way relationship has reduced their market to one where price is everything.

This has the potential to become the new differentiator between brands that have, until now, failed to develop proper relationships with their customers. Imagine the attraction of the first insurer. This insurer, instead of automatically offering you an increased premium, offers to match a quote from a rival – and makes it a promise. Or the mobile phone provider that, instead of only ever contacting you when it wants to sell you something, checked if you were happy with the reception in your home, and then attempted to do something about it.

There is nothing attractive to the customer about a company that only ever gets in touch when it wants to sell you something. After all, a brand exists to create a trusted relationship between a company and a customer. When that relationship becomes lopsided, the trust is broken.

Who wants to be in a relationship where all you do is give, at best taken for granted, at worst taken advantage of?

Make efforts after the sale

Something else the minister said to me and my wife on our wedding day has stuck with me: “Remember what brought you here”. For a brand/customer relationship to last, the brand has to make an effort beyond the sale and have the structure to provide what the customer needs. After the rush of enthusiasm has worn off, after the hearts and minds have been captured, then it’s time to concentrate on the experience. Like any successful long-term relationship, a customer journey that keeps people engaged is tough to maintain – you need to attract, engage, retain and satisfy lots of people with different needs.

Perhaps it’s time that more brands and companies thought of their customers as cherished partners in a long-term romantic relationship.

Otherwise, they could find their attachment to bright and shiny enticements becomes a hindrance to their long-term survival. Rather like the peacock’s tail.